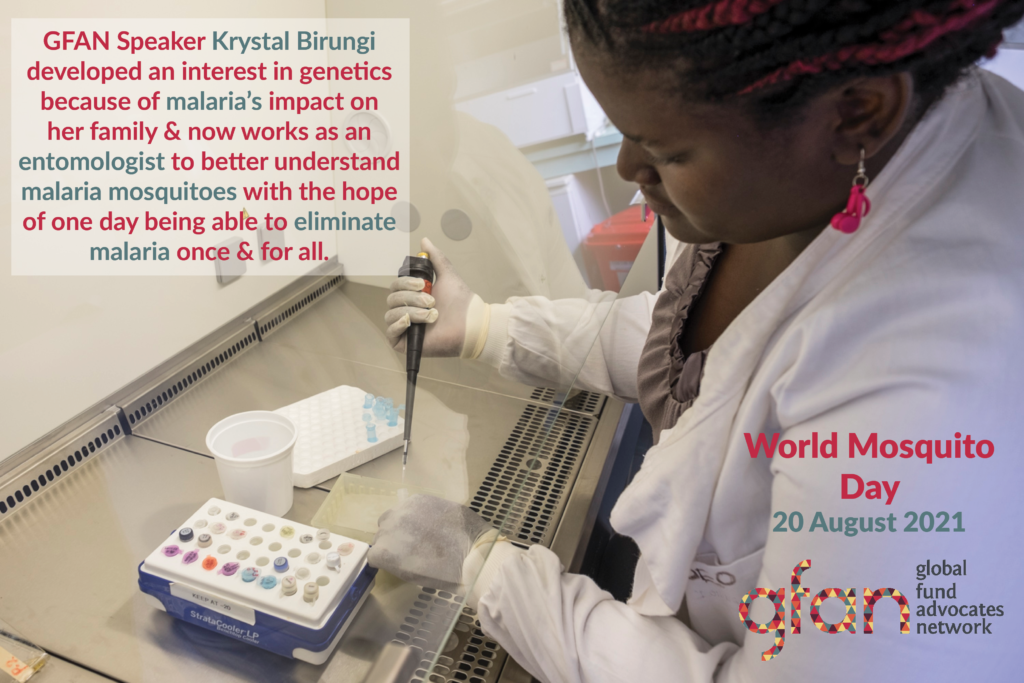 On World Mosquito Day, we sat down with GFAN speaker Krystal Birungi to talk about the role of the Global Fund in her life and the course of the fight against malaria in Uganda. She knows mosquitos and the ravages they can bring all too well, from studying them as an entomologist but also from the way malaria has touched her and her family.

Krystal, tell us about yourself, and why you decided to dedicate so much time to the fight against malaria.

I am an entomologist working at the Uganda Virus Research Institute under a project called Target Malaria. It is my goal to see a world free of malaria, where mothers no longer have to live with the fear of losing a child to this disease.

Growing up, my family didn’t have much. While my parents worked hard, they just couldn’t afford a lot of things including sometimes health care. Malaria was especially scary to us because it was this constant worry that you could catch it at any time and every time you did, you could die. My siblings and I did all catch malaria, and almost actually did die. Yet we were the lucky ones, because we didn’t. The Global Fund programs brought the Village Health Teams to my village when I was a teenager. This brought free malaria diagnosis and treatment to the villages. They also funded free medicine at the hospitals and healthcare centers. They distributed free mosquito nets. Finally having malaria was not necessarily a death sentence. Seeing people working to do something about this inspired me to become who I am today, working with a program looking for new and innovative malaria control solutions to add to the existing methods.

What has been the impact of Global Fund programs in Uganda?

The Global Fund has distributed bed nets and malaria medicine throughout Uganda, and funded Village Health Teams throughout the country. In the country over 90% of the population is at risk of malaria, and the disease remains the number one cause of hospitalization and death for children under the age of five. Malaria causes a huge strain on people’s financial status and their ability to work or go to school. Thanks in part to the Global Fund programs, the mortality rate of children under the age of five has gradually fallen from 101.6 deaths per thousand live births in 2006 to 49 in 2017. That’s a decrease from over 10% of all children under five years old annually to 4.9%. That is truly amazing. I like to believe that going forward, we can get that number down to zero.

Why are you an advocate? Why are the issues you advocate for important to you personally?

How could I not be an advocate? Malaria is a disease that is not only preventable but is also entirely curable, and yet thousands of Ugandans die from it each year. I am a mother and thankfully, I can afford health care for my child. The majority of parents in Uganda cannot.  My mother lived with the fear of losing a child to malaria, and I grew up with an understanding of what could happen when you cannot afford health care for malaria. I still see it every day in my work in Ugandan villages. The Global Fund is making a huge difference in people’s lives every day. I am honored and proud to advocate for the global fund in any way possible.

If you could describe the effect you hope to have with your advocacy, what would you say?

To help funders understand the work the Global Fund does and give them a sense of purpose in contributing to it.

What does being a GFAN Speaker mean to you?

To me being a GFAN speaker means the world. I still have trouble believing the selection process thought my story was worth telling because the truth is it’s only one of many. If I could just tell everyone to donate to the Global Fund, I would. However, I do understand that it’s about more than that and I’m very happy to tell my story and that of many others to help the world understand why the Global fund is so important, and why I have no trouble saying it saved my life.

The Global Fund contributes hugely to malaria control efforts in Uganda and thus saves life, but it does so much more than that. Aside from all the programs supporting the control of other diseases like HIV, the Global Fund saves generations. It improves quality of live for entire populations. I can say that it saved my life from malaria and inspired me to choose a career in entomology and work in mosquito control for malaria control today. Therefore because of the Global Fund, I’m today a scientist trying to make a contribution to public health in Uganda. Imagine how many doctors, engineers, artists share my story. Every child saved, is an entire future saved. The Global Fund is truly invaluable to the people where it operates.