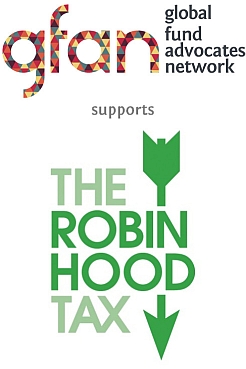 The ROBIN HOOD TAX could fund the Global Fund’s gap of US$2.5 billion.

We need everyone who supports the Global Fund all around the world to demand that European leaders introduce a wide-ranging Robin Hood Tax and include the Global Fund to Fight AIDS, Tuberculosis and Malaria in its allocation.

Add your voice and invite colleagues, friends and family to do the same: SIGN HERE

There is much to play for – an ambitious outcome will maximise chances of serious money for health, particularly for the fight against HIV, tuberculosis and malaria.

Signing the petition and showing the leaders of these countries how much people care could make a real difference to the eventual result!

What can you do?

Why should your organization care?

Do you work in Global Fund resource mobilization? Are you a service provider? The Robin Hood Tax is one of the most important and tangible means we have right now to fill the gap in financing.

If we don’t act to make the Robin Hood tax a reality, we will all be losing out on up to €35 billion a year that will potentially support global health, development, climate change and poverty initiatives around the world. We cannot afford our cost of inaction.

Reaching One Million signatures on this petition is an important milestone that could raise the profile of the campaign and GFAN members can make a huge contribution by being part of the final push to get us over the line.