GFAN Speakers are advocates and volunteers who take time out of their extremely busy schedules to speak with people around the world about the importance of the Global Fund.  This week, GFAN Speaker Resty Nalwanga shares with us the work she does with young mothers in Kampala, Uganda and why the Global Fund is important to her.  Resty’s childhood had her shuffled around frequently between relatives as she struggled to be healthy.  She contracted TB twice and was diagnosed with HIV when she was a teenager.  During her illness, Resty started volunteering at local health centres and became involved in youth HIV advocacy work.

Today, Resty’s work focusses on community sensitization and workshops on HIV and TB.  “So far my interventions with these community members shows there’s still limited information on tuberculosis and what happened to me when I was a kid still exists.  Mothers incorrectly administer medication to the children hence making the disease become more resistant. Others relate it to witchcraft and never go to hospital, and others do self medication for cough.”

When Resty was younger her guardians did not provide appropriate treatment, including giving her herbal remedies, which impacted her recovery and caused her first treatment to fail.

Her work also involves training, in addition to health supports,  “I also train young people and teen mothers on economic skills development, most of the interventions with these groups they raise a lot on poverty issues which restrict then to reach out to services a times they can’t afford transportation, X rays or any other accompaniments that’s comes along with their full treatment.”

In one of her recent workshops held in Bwaise, Kampalawith teen mothers living with HIV, the young women shared their stories and struggles with TB and HIV.  The women in the workshop spoke of the many barriers that may impede young, pregnant HIV positive women seeking treatment including, the fact they are dependents and may have to ask for permission to go for services, midwives may refuse to attend to their births due to their fear of the virus, lack of money or support from family, lack of transportation to the clinic, and in the case of TB specifically, fear they might be blamed for bringing the disease to the family.

The reality that both stigma and discrimination are impacting access to health care for these young women, and also shows a critical gap in health care.  It speaks to the challenges that still remain if we hope to end the epidemics of AIDs, TB and Malaria.

One young woman at the workshop shared the details of her story and why she did not access treatment right away.  She had to leave school because she could no longer afford the fees, and contracted TB while working at a casino.  She failed to seek treatment right away, as she had also taken up smoking, and she needed the money.  After several months her condition deteriorated, and she could no longer work.  She was forced to go to a doctor where she was diagnosed with TB, a disease she had never even heard of.  Following her diagnosis, she lost her job, found out she was pregnant and was also diagnosed as HIV positive.  She reached out to Resty’s organization, Tendo’s World as she did not know where to turn and wanted to kill herself.

“She called me for help and we had to counsel her on adherence on her medication, we monitored her under the mentor mother team and her course of treatment on tuberculosis was finished in August 2018. And now we are monitoring her on pregnancy journey.”

We can see from this young woman’s story, how critical additional supports are for accessing and understanding health care and one’s health care needs.  It can be a matter of life and death.  A holistic set of supports that puts patients rights front and centre is key to global goals of getting back on track and eliminating AIDS, Malaria and TB.

On the Importance of the Global Fund:

Resty is clear on the importance of the support of the Global Fund to her and to her community.

“I am so grateful for the support of The Global Fund in providing support toward HIV, TB and Malaria. Looking in my community its poor that a person can’t afford a meal for a day, but if drugs are available and they are free, at least we shall not have any deaths.  And majority now have hopes of working and some of the mentor mothers are willing educate their fellow mothers about tuberculosis, HIV and other related infections.” 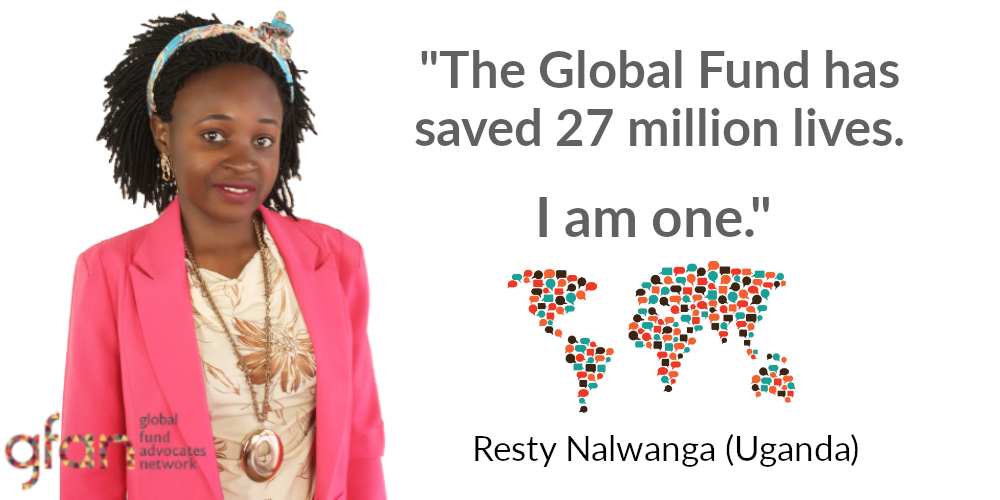