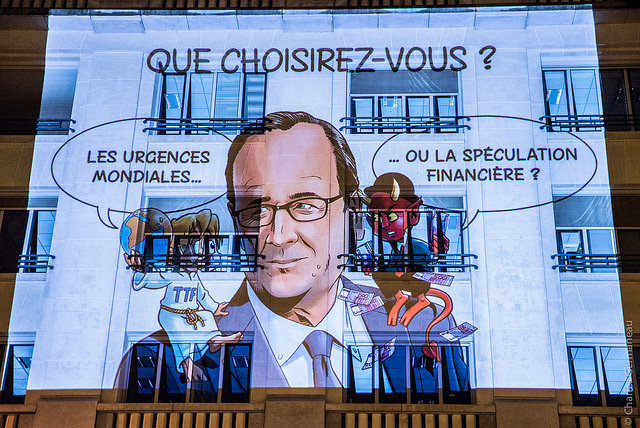 Projection on Germany Chancellory
(© Mike Auerbach). On the European Day of Action, the German Campaign (Steuer Gegen Armut) asks Angela Merkel whether she will take the sides of the banks or citizens.

Sending a message in Spain
(© Guillermo Gumiel). A projection on the Spanish Parliament building. Where Europe’s leaders stand on the FTT: Behind bankers? Or citizens?

Projection in Paris
(© Charles Germaneau). Before European finance ministers meet tomorrow, the French campaign have projected a message on their national stock exchange. Targeted at President Francois Hollande, we want to know if he’ll back an FTT for people and planet, or a tax written by the bankers?

What has happened to negotiations on December 9th?

There is still hope we can get a broad based tax!

How can you help?