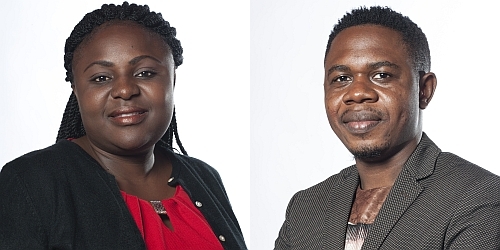 Each champion in our GFAN Speakers Bureau dedicates themselves in their work to advocating for the health of their respective communities. For some, this focus developed as a result of personally contracting HIV and/or tuberculosis; for a few of our champions, however, it was a result of seeing how the three epidemics affected the communities in which they are a part of.

Mirriam Banda Chisamba is the primary health care provider, midwife, nurse, administrator, counsellor and health champion to 15,000 people in her region in eastern Zambia at Kafumbwe Rural Health Centre, 600km from the capital, Lusaka. “Malaria has caused havoc with my nation’s health. In my own career, I have memories of women and children dying of malaria on hospital beds. Some even died in the queue as they waited to be attended to by the doctor. Six years ago, I almost lost my daughter to malaria,” Mirriam remembers. “But Zambia is an amazing success story. In just a few years, we have reduced the number of deaths by 50 per cent. We couldn’t have done it without help from the Global Fund.” The malaria nets, diagnostics and medicines at Mirriam’s clinic are provided by the Global Fund. Mirriam got into advocacy work very recently. In 2016, Zambia set a goal to eliminate malaria by 2020; Mirriam wants to help to ensure the successes are maintained and the goal is reached by inspiring donors to keep supporting the Global Fund.

Serge Douomong Yotta’s commitment to fighting AIDS in Cameroon began when he noticed a wave of deaths amongst friends. He became personally motivated to stop the spread of HIV within his community, so he co-founded Affirmative Action to respond to the injustices faced by LGBT people in Cameroon as well as to provide access to HIV services. In his regular visits to clinics and as a former member of the Country Coordinating Mechanism, he has seen first-hand the benefit of the Global Fund’s presence. Serge thanks the Global Fund for his continued health and his ability to feel protected and free, especially in an environment where homosexuality is strongly condemned. “The human rights approach promoted by the Global Fund ensures that my government is doing something to improve the lives of gay men because until recently their needs were ignored by public health policies,” Serge explains. “If the Global Fund gives grants, there has to be respect for human rights and gender equality. So, when my country submits a proposal to the Global Fund, that proposal must include a human rights component.” The Global Fund also provides support for prevention supplies, counselling, training workshops for policy makers, clinicians and police officers, and legal representation. Serge used to dream of a Cameroon where gay men would be accepted as human beings and with Global Fund support he sees that this can be a reality.