Over 60 advocates and partners were invited to attend this year’s annual GFAN strategy meeting in Amsterdam from 26-28 January 2016. Representatives were present from key donor country advocacy organizations, including grantees of the New Venture Fund for Global Fund Advocacy, GFAN’s Steering Committee, GFAN’s regional hubs in Africa and Asia-Pacific, Global Fund Board civil society delegations, grantors and the Global Fund Secretariat and its technical partners.

One key message attendees agreed they need to focus on over the coming months is why it is so urgent to invest now over the next 5 years and why the Global Fund is key to this. Targets set in the global plans and strategies for the three diseases are key to demonstrating this: they show a clear and urgent need for increased funding NOW of the responses and that even maintenance levels of funding will cause a rebound. Using them will provide essential context for the replenishment but also for the full effort needed to fight the epidemics. 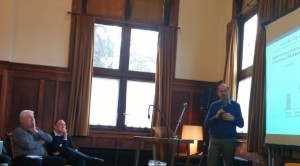 One of the big challenges shared by Christoph was around foreign exchange (FOREX), which has played a huge role in the amount of resources available during this latest allocation period and expectations for the next replenishment. The $12bn raised for 2014-2016 now is actually less because the Global Fund has been receiving less actual US dollars (USD) than pledged because many currencies have decreased against the dollar. The current target of $13bn for 2017-2019 is actually ambitious in terms of current exchange rates because overall it’s actually aiming for a 20% increase from donors (as it equals over $15bn in 2013 USD). The Global Fund Secretariat encouraged civil society to ask for as much as they can, but the Global Fund’s goal is a political decision based on an expectation of how much it can raise.

Christoph remained with the group on the second day to take part in discussions on donor country strategies. Over a dozen donors were analyzed as advocates shared their ‘asks’, the countries’ political situations and potential for Global Fund support and collaboration. The Global Fund Secretariat is positive overall: it believes there’s more potential for increase than decrease amongst top 15 donors, particularly amongst 5 countries within G7. It’s looking positive for the US, UK, Germany, EC, Canada, Australia, Norway, Italy, Belgium, Ireland, Spain and some smaller donors, with likely maintenance in France, Japan and the Netherlands.

Mark Dybul, Executive Director of the Global Fund, joined the meeting during the third day to set the stage for the replenishment and how the Global Fund and its messaging and approach need to adapt to current realities. Mark took on questions about the refugee crisis, how the Global Fund can support country transition, allocation and projects like the Equitable Access Initiative.

Mark cautioned that global health and the three diseases is not high on the agenda for many political leaders right now, particularly as the refugee crisis has diverted large amounts of ODA towards in-country refugee support. This is why the “End of the epidemics” cannot be the only message. As some diseases are overlooked by certain countries, advocates need to look at more overall persuasive arguments and to package the message within health systems and human rights, particularly gender and LGBTI. Mark noted that the Global Fund is also adapting to work in challenging operating environments with migration, with how to create smoother country transitions and to push an ambitious domestic resource mobilization agenda.

Overall, however, the outlook at the Secretariat is positive: if we look back 15 years to what people said was impossible, we’ve now raised billions of dollars, countries have picked up the pace and millions of lives have been saved. Advocates however raised the need for presenting the investment case “ask” of US$13 billion for the 2017-2019 as the floor and the start of an ongoing resource mobilization process if we really want to end the epidemics. This replenishment will be challenging, but previous ones have been just as much so, and we should still be ambitious in putting forward our messaging.

Participants also took part in small group work to examine several important streams of events and themes related to a successful Global Fund Replenishment. Other sessions presented to the group addressed the GFAN Speakers Bureau, new advances in technologies among the three diseases and board updates from the Communities and civil society Delegations.