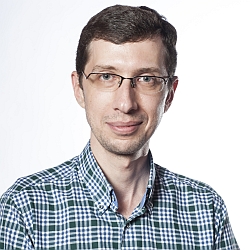 After a persistent cough would not go away, Timur visited a Global Fund-supported clinic and was tested and diagnosed with tuberculosis. As someone who has HIV, his chances of contracting TB are much higher than the general population. Timur has had tuberculosis twice: both times, he was diagnosed using modern diagnostic machines that were purchased through Global Fund grants and his treatment was covered by the Global Fund. His anti-retroviral treatment (ART) for many years was supported by Global Fund-financed programmes. Timur is sure that without the Global Fund he wouldn’t be alive today.

Shortly after his HIV diagnosis in 2006, a friend encouraged him to join the PLHIV movement in Uzbekistan – with his background in human rights law and as an English speaker, he quickly became involved nationally and globally. Later, when he developed TB, he realized that its movement needed stronger advocacy and he switched his focus to TB activism.

Timur works as a human rights and public health consultant. Most recently, he has worked for UNDP, the World Health Organization and the Global Fund, among others. Currently, Timur is a member of the Stop TB Partnership Board, Global Fund’s Technical Review Panel and CRG Advisory Group, Board of TBpeople – the global network of people affected by TB, Board of AFEW International and the Oversight Committee for the TB Europe Coalition. He has co-authored a number of publications.

The Global Fund has been in Uzbekistan since 2006 and supports 9,500 on ART and is focused on prevention of HIV transmission among key populations and has detected and treated 62,000 cases of TB.