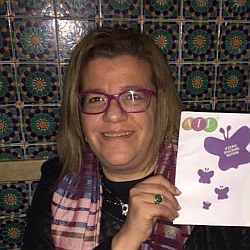 Souhaila found out she was HIV positive on her 28th birthday. At that time, in 2000, Tunisia did not offer viral load count services, and so she travelled to France when she could for her consultations. By 2007, Souhaila’s CD4 had gone down to 300; at the same time, the Global Fund entered Tunisia and she started her treatment.

Souhaila worked as a health mediator for many years. Through her own personal experiences, she understood the need for stronger advocacy for the rights of women living with HIV. Souhaila also saw that people in the HIV community in Tunisia needed an organized voice in the decision-making process of HIV programs. With her activist friends, she started the Association Tunisienne De Prévention Positive. Souhaila is now its President and she also founded and runs a private Facebook group for people living with HIV in Tunisia.

While the prevalence of HIV is relatively low in Tunisia, punitive laws around drug use and same-sex relationships are making HIV a concentrated epidemic. The Global Fund has supported Tunisia since 2007, with much of its financing supporting HIV programs that target prevention amongst key affected populations.