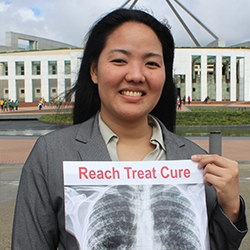 Louie collapsed just after New Year’s Eve 2007 and found herself unable to move. Diagnosed at age 24 with tuberculosis meningitis, she had been planning to take her board exam to become an architect and to leave the country to start her career. Instead, she found herself going through years of treatment and its debilitating side effects for TB and then MDR-TB. During her difficult treatment, she lost her vision permanently and experienced partial paralysis, extreme sensitivity to the senses, symptoms of Parkinson’s, hypothyroidism, muscle spasms and signs of infertility.

Louie also experienced severe depression. To help herself work through acceptance of her disability after her treatment, she became involved in disability advocacy and was quickly appointed as Executive Director of the local TB patient association. In her patient treatment advocacy work, Louie promotes two key issues: patient empowerment and universal access to treatment including those with disability.

Louie now works for the Institute on Disability and Public Policy for the ASEAN Region and is married and a mother. Throughout her years of advocacy, she has worked with the Global Fund’s Country Coordinating Mechanism in workshops on key affected populations, been selected as a regional Global Coalition for Tuberculosis Activists representative, spoken at several International Union Against Tuberculosis and Lung Disease conferences and presented the case for funding TB treatment to Australian parliamentarians.

The Philippines is a high-burden TB country. TB accounts for 59% of total Global Fund financing in the Philippines. Global Fund programs have detected and treated 350,000 new smear-positive cases since 2003.

Tuberculosis fight critical in Asia-Pacific, advocates warn (RESULTS Australia, 1 September 2015)
GFAN Speaker: TB advocates are finding their voice (GFAN, 22 February 2016)
What The Global Fund replenishment means to people on the ground – a personal story (Aidspan, 2 March 2016)
Tuberculosis Made Me Blind, But We Can Make Sure No One Else Needs to Suffer Like I Did (Huffington Post, 24 March  2016)
Help Us Unite to End TB (Global Moms Challenge, 24 March 2016)
Speaker joins GFAN Asia-Pacific in regional consultations (GFAN, 18 April 2016)

Interested in communicating with one our speakers? Get in touch with us here.