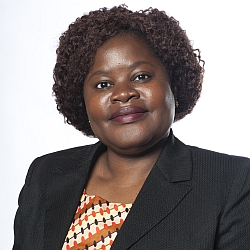 In 2004, Clara was 25 years old and working in Voluntary Testing and Counselling at a local hospital when she noticed she was having similar symptoms as her patients. She knew she might have some HIV-related condition and gathered the courage to test herself. However, at the time, while she knew she had HIV, it was difficult to get a CD4 count. Clara couldn’t convince the local clinician to start her on medication, so she travelled 400km to get the test: her CD4 count was 32 and she had progressed to AIDS. Now her viral load is undetectable.

Clara’s husband and daughter are also HIV positive; Clara also has a son who did not contract HIV thanks to vertical transmission services. But HIV is not the only disease that has touched Clara’s life. Her husband and daughter went through 19 months of treatment for MDR-TB and both survived thanks to the Global Fund’s support. As Malawi is a malaria-prone country, her family gets malaria quite often. She is appreciative of what the Global Fund has contributed to her personal life.

Clara is the National Coordinator for the International Community of Women Living with HIV (ICW Malawi Chapter) and a member of the African Community Advisory Board for Y+ and the CHAI-UNITAID Community Advisory Board for Treatment Optimisation Project. Clara offers technical advice to PLHIV organizations, encourages testing, combats stigma and discrimination and speaks publicly about HIV in Malawi. Clara feels empowered to share her story to help in the development of policies and commitment of funds – domestically and through the Global Fund – to address real life issues people face.