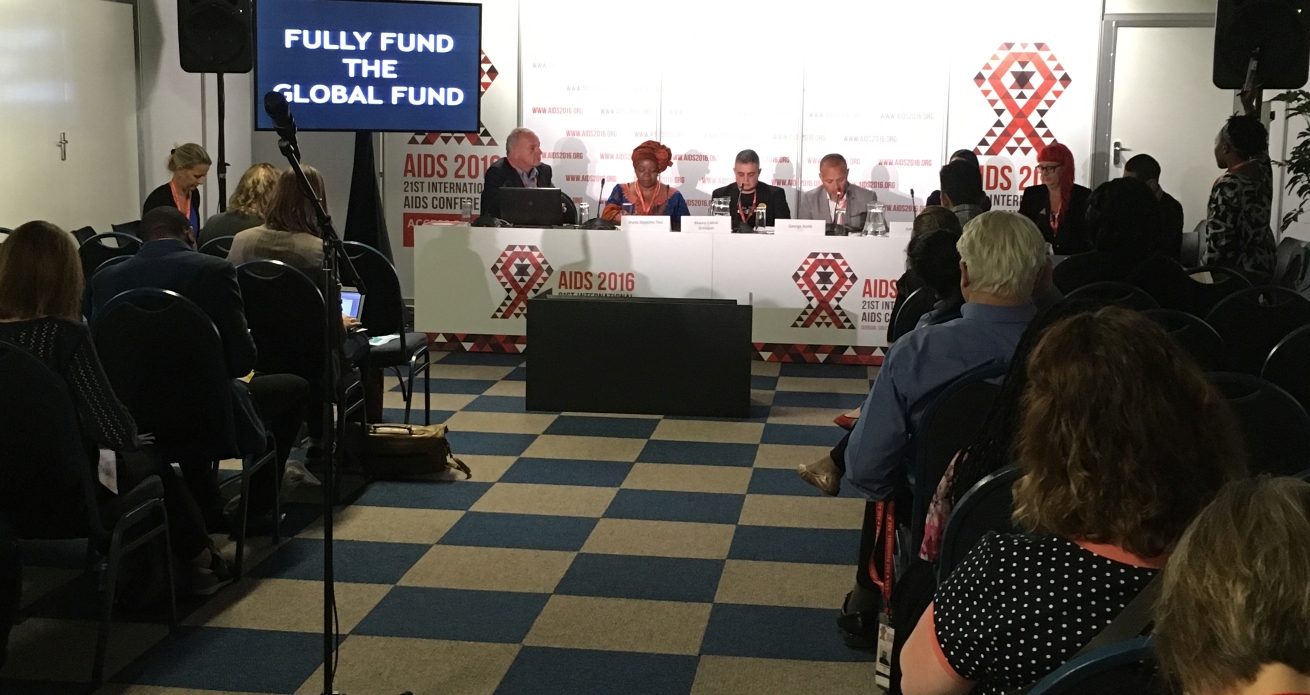 DURBAN, South Africa, 20 July 2016 – Fully replenishing the Global Fund to Fight AIDS, Tuberculosis (TB) and Malaria is essential for delivering on the promises to end the HIV/AIDS epidemic made in the Sustainable Development Goals and the UN Declaration on Ending AIDS. While fully replenishing the Fund would save millions of lives, failure to do so would unravel years of progress and jeopardize effective programs for reaching key and vulnerable populations at greatest risk for HIV.

This urgent message was delivered at the 21st International AIDS Conference in Durban, in a civil society call to action and two new reports launched today by the Global Fund Advocates Network, a partnership of more than 440 members from 76 countries; and the Free Space Process, 11 global HIV and key populations networks – including people living with HIV, transgender people, women, sex workers, people who use drugs and men who have sex with men.

The press conference featured Princess Mabel van Oranje of the Netherlands, Global Fund Chief of Staff Marijke Wijnroks and representatives from Global Action for Trans Equality (GATE), Men Who Have Sex With Men Global Forum (MSMGF), Global Network of Sex Work Projects (NSWP), International Network of People Who Use Drugs (INPUD) and others.

“The road to the end of AIDS, as well as to the end of TB and malaria, depends on the catalytic role of a fully funded Global Fund,” said Peter van Rooijen, Executive Director of International Civil Society Support, secretariat to the Global Fund Advocates Network. “The cost of inaction is just too high. We risk reversing tremendous progress and losing millions of lives unless the Global Fund is fully replenished this year.”

“The Global Fund is a proven mechanism for empowering countries to fight back against AIDS, TB and
malaria and take control of their futures,” said Dr. Mark Dybul, Executive Director of the Global Fund. “The Global Fund is effective because it puts those who are most vulnerable at the heart of the response.”

Inspired by protests in the streets 16 years ago when the International AIDS Conference was last held in Durban, the Global Fund has helped turn the tide against the epidemic by investing in high-impact prevention, treatment and care programs and pioneering a new model that reaches groups in greatest need.

The new report Global Fund Replenishment 2016: The Cost of Inaction demonstrates that inadequate investment in the Global Fund will threaten millions of lives and result in billions of dollars in additional costs. According to the report, failure to fully fund the global responses for AIDS, TB and malaria, including replenishing the Global Fund, over the next six years, will:

Additionally, the Cost of Inaction report describes how simply maintaining current levels of investment could result in a rise of drug-resistant strains of HIV, TB and malaria that are even more costly to treat. For example, the number of people with HIV who will require more expensive second-line treatments – usually as a result of drug resistance – is estimated to double between 2014 and 2020.

Investment in Key and Vulnerable Populations Needed Now More Than Ever

The new report Key Populations and the Global Fund: Delivering Key Results explains why ending AIDS, TB and malaria will be impossible without addressing the needs of and working with key and vulnerable populations. It details the unique role the Global Fund has played to support and mobilize domestic resources for key populations, challenge human rights barriers to health and provide opportunities for these populations to participate in the development and implementation of programs that affect them.

The report highlights recent UNAIDS data (Prevention Gap Report 2016) demonstrating that more than 90 percent of new HIV infections in Central Asia, Europe, North America, the Middle East and North Africa are among people from key populations and their sexual partners:

“HIV disproportionately impacts overlooked and marginalized communities,” said EriKa Castellanos, an HIV-positive transgender woman who helps oversee Global Fund-supported programs in Belize. “The Global Fund places special emphasis on reaching these communities with lifesaving treatment and prevention services. We will never end the epidemic without engaging key and vulnerable populations, and the most effective way to do so is through the Global Fund.”

The report, Key Populations and the Global Fund: Delivering Key Results, was written in partnership with the Free Space Process and ICASO