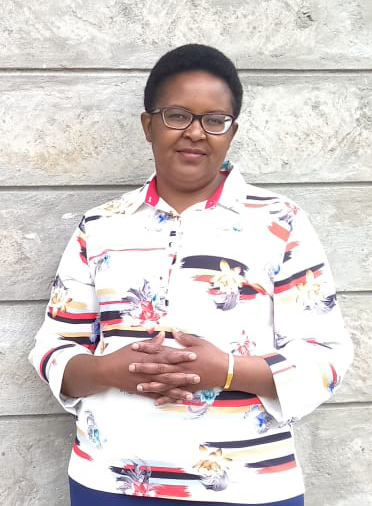 As a nurse working in a TB and HIV clinic in Kenya, Naomi never thought she’d be on the receiving end of a misdiagnosis and, what she now considers to be, mostly needless suffering. Just 7 months into working at the clinic, Naomi developed lower back pain that no pain medication could cure. After months of consultations and pain so extreme that she could barely walk, an MRI and review of lumbar spine x-rays finally revealed that Naomi had extrapulmonary TB in her spine.

Thanks to the Global Fund, Naomi’s treatment was provided at no cost, and she was also visited regularly by a Community Health Volunteer who ensured she adhered to her medication and also provided a range of psychosocial support. Though her first-line TB treatment was completed after 6 months, her back pain persisted; the TB had caused the collapse of her 2, L3, and L4 lumbar vertebrae, which would require surgery. Naomi then travelled to India for back surgery and was also placed on an additional 24 months of TB treatment when it was revealed that she in fact had MDR-TB. Just 5 weeks after surgery, to the amazement of all of her colleagues, Naomi was back at work in the clinic, and used her new-found ‘miracle’ status to successfully lobby the hospital for better facilities for the clinic.

Naomi’s dedication to the fight against TB has come at great personal cost, but it helps her to constantly reflect on what more she could do to improve TB case identification and reduce stigma around the disease.

“It is my fervent belief that I must explore all avenues of awareness creation on matters of TB and that highlighting my plight as a health worker affected by TB uniquely positions me to inspire others, across all levels of society, to do more to help end TB.”