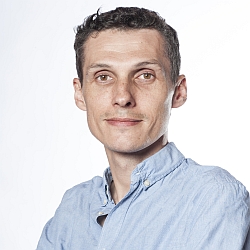 Anton was 14 when he started using drugs and 16 when he began injecting himself. Anton describes himself over the 11 years he was using drugs as an “ordinary street junkie”: he had regular conflicts with law enforcement, persistent health issues, and no job, home, or family.

After many failed attempts at getting clean, in 2003 Anton joined a Global Fund-financed harm reduction programme, thanks to which he found out he was HIV and hepatitis C positive. In 2004, Anton became one of the first patients of Global Fund-financed opioid substitution therapy in Ukraine.

It was then that he saw his life turn around. In 2005, Anton started antiretroviral therapy (ART), and in 2017 he was cured of hepatitis C.

Now, Anton is married and has become a father, and is an ardent advocate on behalf of people living with HIV (PLHIV) and people who use drugs (PUD).

"It is important for us to continue to save lives and to continue the global fight against HIV and tuberculosis (TB) throughout the world, but for this we need money. [...] These are just numbers, but human lives are behind these numbers and it is very important for people like me, because my life was also saved by the Global Fund.”'

Anton in the News